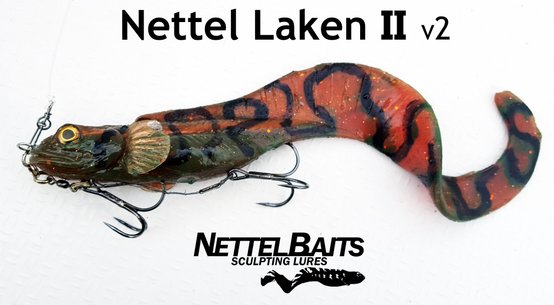 Nettel Laken 2 v2 is a carefully designed and hand crafted loose body soft lure with great fishing abilities and good catch results on its back. This is the second generation of the lure (v2 = version 2).

V2 was developed from the original master model and was made to have a higher quality and finish, and also made the production more effective than before. It is produced by hand from two part multi-function-RTV-molds.

The background to this lure design was to create a super realistic eelpout soft lure, with incredibly high level of details. It is designed with a downward facing curly tail that is partly integrated into the body, following along its back like the real fish. This also gives the Nettel Laken 2 v2 its irregular and flexible movement in the water. Since the big tail is connected to the upper part of the body it makes the lure wobble from side to side in slow retrieve, while getting more static and eccentric in fast movement. When I fish with the lure myself I vary the retrieve speed to make it swim differently making it wobble and swing like a confused or wounded fish. The pectoral fins gives the lure its final touch of detail and also makes an interesting silhouette from below. This lure looks good from every angle.

To create the master I have used different methods throughout the process, but mostly it's the clay sculpting part that gives it the final look. It is my own interpretation of an eelpout, but multiple reference pictures of eelpouts, burbots and other fish were used to find its look and character. This lure is primiraly thought to be fished slow to give big fish the time they need to decide they want to eat it. From north to south swedish anglers have had huge success catching big pikes with this lure! Some fishing reports have also came from other countries.

"During 2016 pro anglers had great success in Swedish pike

anglers fishing with this and other Nettel Baits lures."